If you have enjoyed the Search My Ancestry blog, why not become a follower? Just click on the icon 'Join This Site' in the right hand margin. 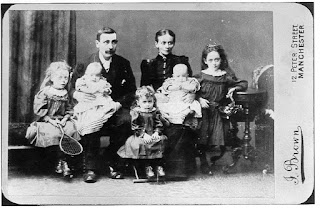 If you notice something particularly odd about the eyes of an ancestor in a photograph – either the eyes being closed or a vacant expression -  consider that this might be because it was taken after he or she had died!

The Victorians were fond of post-mortem photographs (an example of ‘momento mori’) as reminders or memories of the dead. In these pictures, the recently deceased were often propped up and dressed as if alive. Their eyes might be artificially held open, or, even more bizarrely, painted in (on the eyelid) after the photograph was printed.

Long exposure times meant that images of the living (and moving) were often blurred. So, if the image of one person in a photograph is unusually clear (whilst those around him are blurred), it’s a possibility that this is, in fact, a corpse!