Family First - a new title by Ruth A. Symes

Coming Soon:
Family First: Tracing Relationships in the Past (Pen and Sword Books, 2015) - a new title by Ruth A. Symes 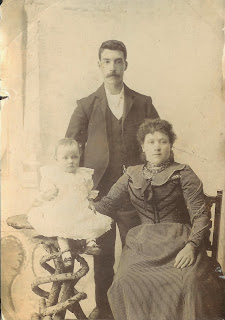 Macho breadwinner or stay-at-home dad?  Fathers these days may be confused about what their role in the family should be, but their uncertainty is not new: fatherhood has always been in flux.  It was the Industrial Revolution which created the real divide between the public world of men and the domestic world of women, with many fathers, for the first time, away from home for long periods.  Meanwhile, the press presented an attractive idea of motherhood, exemplified by Queen Victoria, which saw middle-class women (or their female deputies) as the main carers of their children.

Moving on in time, the First World War removed many fathers from their families entirely and, though middle-class men were encouraged to ‘nurture’ their children in the brief period between the wars, the renewal of hostilities in 1939, saw them once more called to a very public role. It was not until the major changes in women’s emancipation, work and society more generally that the domesticated dad could really expect not to be laughed out of the house!
In Family First: Tracing Relationships in the Past, Ruth A. Symes looks at fathers (as well as mothers, babies, infants, siblings, aunts, uncles, cousins, grandparents, friends, neighbours and associates) during the period 1800-1950, and asks how and why these roles changed and, crucially, how you might find out more about your ancestors’ multiple relationships within their own families.
Ruth Symes
Freelance Writer and Historian
ras20466@aol.com
www.searchmyancestry.blogspot.co.uk
Posted by Ruth A Symes at 1:51 pm