Delighted to announce that Miss Weeton: Governess and Traveller, edited by Alan Roby (and with an introduction by me), has just won the 2016/2017 Alan Ball Award for a local history hardback!!!!! 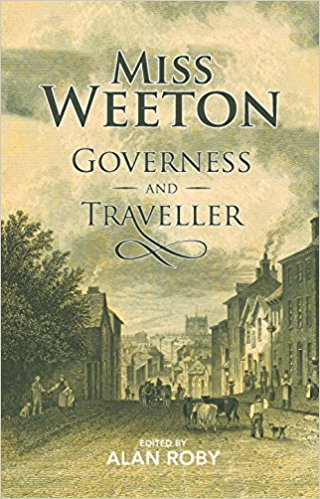 Miss Weeton, Governess and Traveller  ISBN 978-1-5262-0553-7
Written in solitude, Miss Nelly Weeton’s letters, journal entries and other autobiographical writings reveal a formidable woman as they vividly transport the reader through Georgian England.  With breathtaking cathartic candour, she reveals the sources of her protracted pain through years of betrayal, intimidation, humiliation and greed.
When her sea captain father was mortally wounded in the American War of Independence, her heart-broken mother removed from Lancaster to Up Holland village, near Wigan, to begin a new life with her two children.  At the age of 31, daughter Nelly finally broke free from the myopic discouragement of those closest to her.  Armed only with determination, a passion for literature and an unshakeable piety, she left the ‘licentious’ village of Up Holland, to eventually gain employment in the homes of the gentry.
With a penchant for excitement and adventure, Miss Weeton rivetingly describes her high risk ‘outside’ stage coach journey to and from London, and her walking and climbing excursions around the Isle-of-Man and North Wales. Her lone ascents of both Snaefell and Snowdon, supported only by a parasol and slippery-soled leather shoes, remain amazing feats of endurance.
On the 5th of June 1812, fortified by three boiled eggs, a crust of bread and wearing a slouch straw hat, a grey stuff jacket, with her map and memorandum book in a bag, she boldly ‘sallied forth’ alone for 35 miles . . .
Buy the book here