A Patchwork in the Family 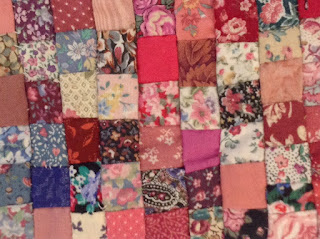 Ruth A. Symes asks what an old piece of patchwork might tell you about your family history


Although quilters in the past could buy job-lots of quilting pieces in local haberdashery stores, quilts and other patchwork items were also often deliberately pieced together from fabric that, for one reason or another, had connections with family life. You may have been told by older relatives that  certain bits of material in your family patchwork came from an ancestor’s wedding dress, or christening gown, or a piece of a relative’s first suit, or the dress that they were wearing when they first met their spouse-to-be. But  whilst, these family stories are undoubtedly fascinating, it’s worth treating them with a bit of caution by asking yourself whether such designs, materials and colours were around at the time the quilt is likely to have been made.


Few very old patchworks have survived, but a number do date back to the late eighteenth or early nineteenth centuries when printed cottons would have been the chief materials used in their composition. Fancier patchwork that includes pieces of silk and velvet will probably have been made in the mid-Victorian period (post 1860 when these materials became more widely available). It might also indicate an ancestor of greater wealth or social standing.  Patchworks that   include synthetic materials must obviously have been made in the twentieth century; nylon for example, was not invented until 1934. If paper templates made from old pieces of newspaper are still attached to the material of your patchwork, you can be sure that the patchwork wasn’t made before the dates upon them.


Another method of working out which generation of your family is likely to have produced a particular patchwork is by looking carefully at the design. The popular ‘mosaic’ designs of the early nineteenth-century were replaced by neater, less higgledy-piggledy, designs as the century moved on. Look out for late nineteenth-century ‘baby block’, ‘log cabin’, ‘crazy’ and ‘hexagon’ designs.


Different geographical areas also had their own specialities when it came to design. A patchwork quilt incorporating spirals is likely to have been made in Wales, for instance, whilst feathers and twisted ropes indicate a provenance of the North of England. In the early twentieth-century schools of design produced more elaborate design ideas for patchwork. And the social class of your ancestors too might be indicated by design. In general, women higher up the social scale, with more leisure time, and perhaps more cultural artefacts around them to act as inspiration, produced designs of more artistry and complexity.


Look carefully at the colours used in your patchwork. Early materials coloured with natural dyes will generally have faded quite considerably. And specific combinations of colours in single pieces of fabric could only be achieved at definite times in the past. The Quilters’ Guild website (www.quiltersguild.org.uk) shows quilt materials in which ‘madder red’ and ‘indigo blue’ dyes appear next to each other, a phenomenon which could not have occurred before 1808 with the improvements in dyeing techniques. Fabrics coloured with the synthetic dyes of the late nineteenth century will be more vibrant than earlier materials used in patchwork. The first such synthetic dye, for example, was Mauveine (a bright fuchsia colour), which was invented in 1856.


Some of the stories behind the making of quilts were written down in one form or another.  In 1824, governess Ellen Weeton enclosed a piece of patchwork in a letter to her estranged eight year old daughter Mary, ‘I am thus minute [exact], my Mary, that you may know something of the history of your mother’s family;… The piece of patchwork is out of a quilt I made above 20 years ago; it may serve as a pattern. The hexagon in the middle was a shred of our best hangings; they were chintz, from the East Indies, which my father brought home with him from one of his voyages. He was never in the East Indies himself, but probably purchased the chintz in some foreign market.’


Victorian Poet Mary Frances Adams, meanwhile set down her patchwork genealogy in the form of a poem: ‘… each neat square, as I sew it in, has a tale of its own to tell/ And I often live in the past as I gaze on patterns I knew well/ That bit of pink was the first new pink ever worn by my little Jane/ Ah me ! She is wrinkled and widowed now and will never wear pink again…/ And that is the piece of the dress I wore on the day that my lover came/ Asking me  - I was then eighteen - to share his home and name.’ [Quoted in The Graphic, July 19th 1873].


And there were other, more specific – or eccentric – reasons behind the composition of some patchworks. The quilting craze which had characterised domestic life in the USA in the nineteenth-century was eagerly embraced by British women in the first years of the twentieth. The Yorkshire Telegraph of January 29th, 1913 quoted an American woman on the composition of her own patchwork quilt: ‘I saved a piece of each washing suit my little son had until he was 10 years old and then made him a quilt of the scraps… Each one told a story. For instance the blue linen scrap was from the suit he wore the first day at school; the white one was from the suit he had on when his picture was taken. He never tired of the quilt. We can entertain him by the hour, telling him of the different scraps.’


A journalist in 1923 commented, that in the past making a patchwork ‘was a much better way of writing your memoirs than that often adopted by the women of a later day.’ (The Gloucester Citizen 18th June). So, never underestimate a family patchwork, in itself – or with the help of other family memories or paperwork – it might well be able to tell you something significant about your ancestors’ lives.
If you have enjoyed this article, why not consider buying one of my family history books?
1.  Stories from Your Family Tree: Researching Ancestors Within Living Memory (The History Press, 2008) Stories-From -Your - Family-Tree;
2. It Runs in the Family: Understanding More About Your Ancestors (The History Press, 2013)  It Runs in the Family ;
3. Family First: Tracing Relationships in the Past (Pen and Sword Books, forthcoming September 2015).